Israel and watchdog groups are calling on the UN to dismiss an official accused of antisemitic and anti-Israel bias from a key UN body tasked with advocating human rights globally.

UN Human Rights Council lawyer Francesca Albanese has acknowledged her “mistakes” when she said a  “Jewish lobby” supposedly controls the United States, while a report by Israel's foreign ministry shows she has compared Israelis to Nazis and accused Israel of war crimes.

The Simon Wiesenthal Center is therefore calling on United Nations Secretary General António Guterres to fire Albanese because of her “history of anti-Semitic and anti-Israel propaganda.” An Italian lawyer, Albanese was appointed this year by the UN Human Rights Council as the UN Special Rapporteur on Human Rights in the Palestinian territories. The government of Israel is also calling for her dismissal.

“It is an outrage to allow a proven anti-Zionist and anti-Semite to head the UN Human Rights Council’s already biased investigation of the Israel-Palestinian conflict,” said Rabbi Abraham Cooper and Rabbi Eric J. Greenberg of the prestigious organization based in Los Angeles. 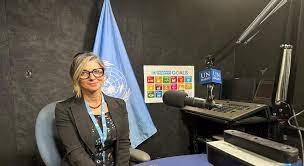 “How Albanese was ever allowed to be appointed to this position is yet another file in the mounting evidence of the systemic prejudice against Israel, and the acceptance of maligning Jews in the United Nations today,” read the rabbis' statement.

They also condemned similar statements made by all three members of the long-running UN Human Rights Council’s Commission of Inquiry on the Occupied Palestinian Territory which is led by Albanese.

In an October interview on UN News, Albanese claimed that countries in the so-called ‘Global South’ recognize what she said is "Israel’s 'settler colonialism” as  manifested in what she termed is Israel's "illegal occupation of the West Bank and other Palestinian territory,"after delivering her first report to the UN General Assembly.

Albanese told UN News that many countries in the West live behind what she termed is a “wall of denial” over the issue, while saying that essential rights are non-negotiable when it comes to negotiating peace.

In her recent report, Albanese repeated claims that Israel imposes 'apartheid" on the Palestinian people.

The Israeli occupation, the report said, “has become further entrenched with systematic and forced alteration by Israel of the legal status, character and demographic composition of the occupied Palestinian territory.”

In her report, Albanese calls for a paradigm shift to “overcome this situation”:

“This can only be resolved by respecting the cardinal norm of peoples’ right to self-determination and the recognition of the absolute illegality of the settler-colonialism and apartheid that the prolonged Israeli occupation has imposed on the Palestinians in the occupied Palestinian territory. Given the settler-colonial nature of the occupation, its overall assessment must change, and so the deliberations of the international community.”

Albanese has continuously referred to Israel as a colonial enterprise, while she claims Jews living during the British mandate and those currently living in the modern state of Israel as foreign interlopers who subjugate native people.

According to the Wiesenthal Center, Albanese also sympathized in her public speeches and social media posts with Palestinian terrorist groups, while describing Israel as an aggressor that is fighting against Palestinian “resistance.”

The Wiesenthal Center says Albanese has dismissed Israel’s appeals for regional security, while she repeats the “obscene and  dangerous anti-Semitic accusation” that promotes “untrue conspiracy theories about greedy Jews controlling world events,” which incites hatred of the Jewish people, all the while there is “skyrocketing anti-Semitism around the world.”

In a 2014 Facebook open letter about their conduct during Operation Protective Edge, when Israel was battling Gaza terrorists, Albanese posted: “America and Europe, one of them subjugated by the Jewish lobby, and the other by the sense of guilt about the Holocaust, remain on the sidelines and continue to condemn the oppressed — the Palestinians — who defend themselves with the only means they have (deranged missiles), instead of making Israel face its international law responsibilities.”

At the time, Albanese was not working for the UN, but had worked for the UN Relief and Works Agency for Palestine Refugees in the Near East (UNRWA).

“One can never find Albanese criticizing the Palestinians for failing to accept or offer peace plans,” Rabbi Greenberg of the Wiesenthal Center said.  “Albanese’s anti-Jewish propaganda is straight from the [Reich Minister Joseph]Goebbels’ playbook,” the rabbi said in reference to the infamous chief propagandist of the Nazi Party.

“If her false charges were made against any other people or country, the United Nations would be in an uproar of disapproval,” said Rabbi Greenberg. He continued: “This double standard at the UN must stop. Albanese must be removed, and the Human Rights Council’s biased witch hunt against Israel must be dismantled if the UN hopes to retain credibility.”

For its part, Israel’s Foreign Ministry deplored what it says is the spreading of antisemitism at the UN. “Antisemitism is a persistent malice that has infected the United Nations Human Rights Council for far too long,” read a statement by Israel’s Permanent Mission to the UN in Geneva.

The Palestine Chronicle, a website that follows regional affairs, dubbed Israel's objections as a "smear campaign."